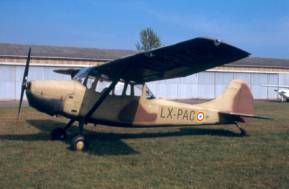 The Cessna L-19A/OE-1 Bird Dog was a four-seat, single-engine liaison and observation aircraft used by the US Army, Marine Corps, and Air Force, the ROK Air Force, and the British Royal Air Force during the Korean War.  In June 1950 the US Army awarded a contract for the L-19A, a military version of the Cessna Model 305A, which was based on the highly successful Cessna Model 170 that was first produced in 1948.  The first L-19As were delivered to the Army in December 1950.  Production of the L-19A continued until October 1954 with a total of 2,486 being delivered to the US Army and Marines.  The 60 Marine Corps aircraft were designated OE-1s.

Cessna Bird Dogs arrived in Korea on 16 February 1951 and were used in during the last two and a half years of the war for artillery observation and utility and liaison work, replacing most of the L-4s and L-5s previously in use.  US Army L-19s served with various divisional headquarters companies and divisional artillery headquarters batteries.  The Marine Corps Observation Squadron 6, VMO-6, began using OE-1s in May 1951.  Six L-19As were delivered to the ROK Air Force, which flew them from April 1951 through January 1953.  The Bird Dog proved so popular with some British pilots that the RAF No. 1913 Light Liaison Flight acquired one through unofficial channels to supplement its Auster AOP 6s.

The L-19A proved to be so successful that additional versions were produced after the war.  The US Air Force procured many additional Bird Dogs, which were re-designated the O-1 in 1962, and considerable numbers were used during the Vietnam War for forward air control.