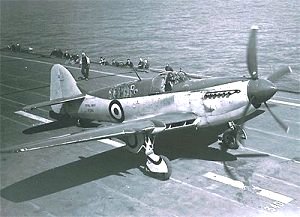 The Firefly Mark 5 with its 2,250-hp. engine had a maximum speed of 386 mph.  It was armed with four 20mm cannon and could carry up to 2,000 lbs. of  ordnance.  One Australian and five British squadrons operated attack, night-fighter, and anti-submarine versions of the Firefly from British and Australian light aircraft carriers during the Korean War.  The Firefly was retired from British naval service in 1956