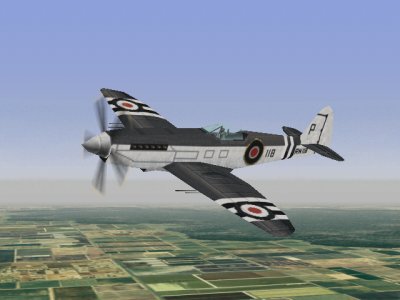 The Supermarine Seafire was a single-seat, single-engine, carrier-based fighter-bomber used by the British Fleet Air Arm during the Korean War.

A Spitfire prototype first flew on 5 March 1936, and the first Spitfire entered Royal Air Force service in July 1938, becoming famous during the Battle of Britain as the chief opponent of the German Me-109.  The Seafire was a naval conversion of the Spitfire adapted for carrier operations. First delivered in January 1942 more than 2,400 Seafires were built.  It entered service in June 1942 and served throughout the rest of World War Two.

The Seafire Mk 47 served for a few months during the Korean War, equipping one squadron, No. 800 Squadron, which operated from the British light aircraft carrier HMS Triumph.  The Seafire Mk 47 had a 2,350-hp engine, could reach 452 mph, and was armed with two 20mm cannon and four 0.303-inch machine-guns.