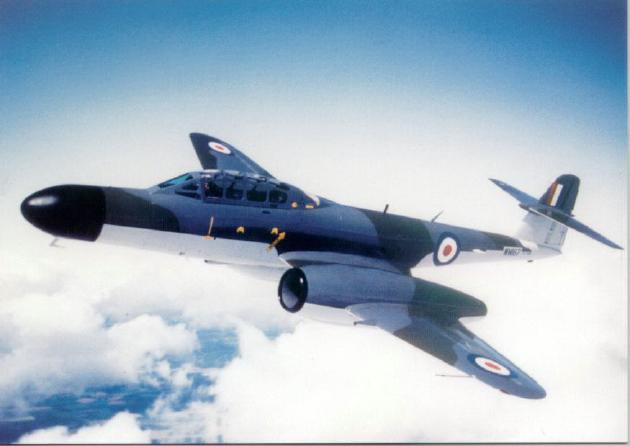 The Gloster Meteor was a single-seat, twin-engine jet fighter used by the Royal Australian Air Force during the Korean War.  A prototype of the Meteor first flew on 5 March 1943.  The first flight of a production aircraft occurred on 12 January 1944, and the Meteor flew its first combat operations on 27 July 1944.  The Meteor was the only allied jet to be used in combat during the Second World War.  The Mark 8 version of the Meteor, the type used during the Korean War, first flew on 12 October 1948.  It was armed with four 20mm cannon, and its two engines each generated 3,600-lb thrust, giving the Mark 8 a top speed of nearly 600 mph.

No. 77 Squadron Royal Australian Air Force, equipped with F-51D Mustangs, was based in Japan when the Korean War began, and it quickly began flying ground support and interdiction missions in support of UN forces.  When the MiG-15 was encountered it was decided to re-equip the squadron with Meteor Mk 8 jet fighters.  Fifteen Mk 8s and 2 Mk 7s, two-seat training versions, were shipped to Japan in February 1951 to begin training, and twenty more Mk 8s arrived during April 1951.  The squadron first flew its Meteors on an operational mission on 30 July 1951.  Originally used as an escort fighter the Meteor proved to be no match for the MiG-15, and the squadron was reduced to fourteen serviceable aircraft by December 1951.  The Meteor was then re-tasked to perform close support and ground attack missions for the remainder of the war.