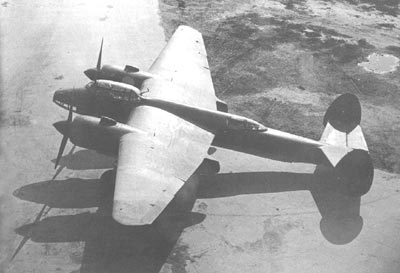 The Tupolev Tu-2 was a four-seat, twin-engine medium bomber that served with the PRC Air Force during the Korean War.  A prototype of the Tu-2 first flew on 29 January 1941.  The Tu-2 entered service with the Soviet Air Force in November 1942.

The Tu-2S, the version used in Korea had two 1,850-hp engines giving it a maximum speed of 342 mph.  It was armed with two 20mm cannon and three 12.7mm machine-guns, and it could carry up to 6,600 lbs. of bombs.  The Soviets classified it as a medium bomber, but in US service it would have been classified as a light bomber.

Three Chinese bomber divisions, the 8th, 10th, and 20th, were equipped with Tu-2Ss, and the 8th and 10th Bomber Divisions were stationed in Manchuria to support Chinese forces in Korea.  Their only major combat actions were the two raids on the island of Taehwa-Do in November 1951.  Four Tu-2s were shot down during the disastrous second raid on 30 November 1951.  As the communist air forces were unable to provide effective escorts the two Chinese Tu-2 bomber divisions were withdrawn from Manchuria in March 1952.