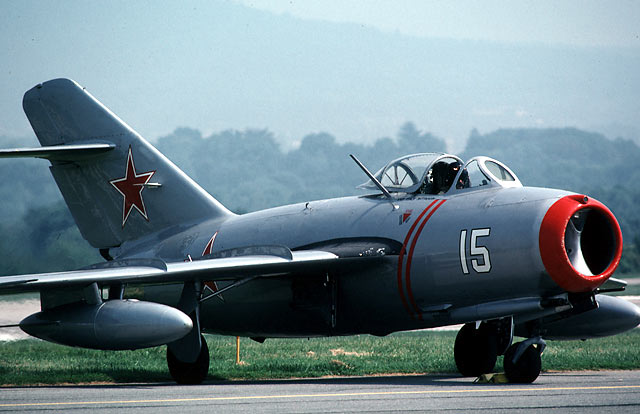 The Mikoyan-Gurevich MiG-15 was a single-seat, single-engine jet fighter used by the Soviet, PRC, and DPRK Air Forces and the Soviet Air Defense Force during the Korean War.  A prototype of the MiG-15 first flew on 30 December 1947, production began during 1948, and it entered service in 1949.  By the middle of 1950 several Soviet MiG-15 units were combat ready.     The MiG-15 had a 5,000-lb thrust engine, based on the British Rolls-Royce Nene-1 engine, giving it a maximum speed of 640 mph.  It was armed with one 37mm and two 23mm cannon and could carry up to 1,100 lbs. of external ordnance.

Two Soviet regiments, each with 30 MiG-15s, entered combat over northern Korean on 1 November 1950.  The MiGs proved so effective that the area near their Yalu airbases was nicknamed “MiG Alley,” and the US Fifth Air Force requested more modern F-84 and F-86 jets to combat the Soviet MiGs.  Overall, the MiG-15 and the F-86 Sabre proved to be a pretty equal match, with the Sabre performing better at lower altitudes but the MiG having superior performance at higher altitudes, particularly above 20,000 feet.  The biggest disadvantage of the MiG-15 was its relatively short combat range.

The Soviet MiG units were joined by a third regiment early in 1951, and two elite Soviet regiments replace the original two in April 1950 as the Soviets attempted to gain air superiority over northern Korea so that the PRC and DPRK could base aircraft in northern Korea.  This led to a lot of air combat, but UN forces managed to keep the northern Korean airfields out of commission.  Nevertheless, in September 1950 MiG-15s caused such heavy B-29 casualties that the US Air Force withdrew the B-29 from daytime service and used them only for nighttime raids for the rest of the war.