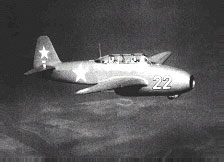 The Yakovlev Yak-17UTI was a two-seat, tandem jet trainer.  The Yak-17 was  developed from the Yak-15, the first jet accepted by the for operational service.  The Yak-17 was a slight improvement on the Yak-15, the main differences being a more powerful engine, tricycle landing gear, and wingtip fuel tanks.  A prototype of the Yak-17 first flew in early 1947, and 430 were produced from 1947 to 1948, when production ended.  A prototype of the Yak-17UTI, a two-seat training version, first flew in mid-1947 and was produced in small numbers.

The Yak-17 was used by the Soviet, Czech, and Polish air forces.  The Yak-17UTI was mostly used by the , but a few were provided to the Polish and Chinese air forces.  It was the first jet trainer developed by the and was used during the early part of the Korean War as the trainer version of the MiG-15, the MiG-15UTI, did not enter production until late 1950.