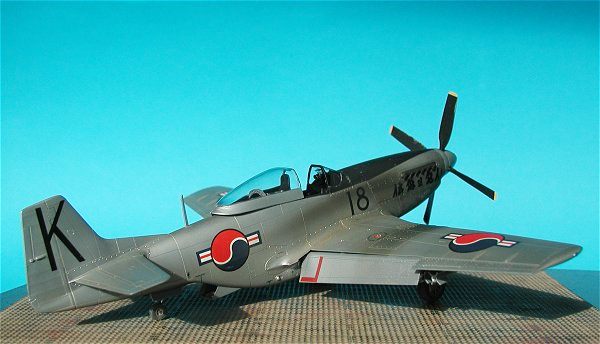 The North American F-51 Mustang was a single-seat, single-engine long-range fighter-bomber used by the US, Australian, South African, and ROK Air Forces during the Korean War.  A prototype of the P-51, its initial designation, first flew on 26 October 1940.  The Mustang entered service with the British Royal Air Force in April 1942 and with the US Air Force a few months later.  The early Mustangs were underpowered, but when the Mustang was upgraded with the Packard Merlin engine it quickly became a superlative fighter, and it is widely considered the best US fighter of World War Two.  It served in every theater and was the primary escort for long-range strategic bombing missions.

After World War Two the US Air Force changed all “P” (pursuit) designations to “F” (fighter) designations so the Mustang was re-designated the F-51.  With the rapid development of jet aircraft the USAF retired most of its F-51s from active service, assigning some to the National Guard and putting the rest in storage.

When the Korean War started there were no F-51s serving with operational units in the Far East.  The few F-51s that remained in service were used for towing targets.  With the rapid advance of the North Korean Army the Fifth Air Force quickly realized that it needed a long-range fighter-bomber able to operate from Korean airfields so it began

On 29 June 1951 the Royal Australian Air Force’s No. 77 Squadron, equipped with 26 F-51s, which was based in Japan for occupation duty, was assigned to the US Fifth Air Force.  On 30 June 1951 ten worn-out Mustangs, which had been towing targets, were given to the ROK Air Force; they were used for both training and combat.  The USAF also removed thirty F-51s from storage in Japan and re-furbished them for combat operations, using them to form the 51st Fighter Squadron (Provisional).  The aircraft carrier USS Boxer made a high-speed, eight-day Pacific crossing and arrived at Tokyo on 23 July 1950 carrying 145 F-51s and 70 pilots.  A total of six US fighter squadrons were re-equipped with Mustangs by the end of July.

The South African Air Force’s No 2 Squadron, equipped with F-51Ds, arrived at Pusan on 16 November 1950, bringing the Fifth Air Force’s Mustang strength to eight squadrons – six USAF, one RAAF, and one SAAF – and one flight (ROKAF), all of them based in Korea.  The F-51 was the only USAF fighter to operate from North Korean airfields during the Korean War.

The appearance of Soviet MiG-15s in combat in early November greatly reduced the Mustangs’ usefulness, and they were gradually replaced by F-80s, F-84s, F-86s, and Meteors.  The last US F-51s were withdrawn from combat operations on 23 January 1953.  Mustangs continued to serve with the ROK Air Force to the ceasefire and for years afterwards.  By the time the ceasefire was signed the ROK Air Force had grown to an entire wing, operating three squadrons of Mustangs.

Mustangs were also used for reconnaissance.  The US 45th Tactical Reconnaissance Squadron, formed in September 1950, flew both F-51s and RF-51s.