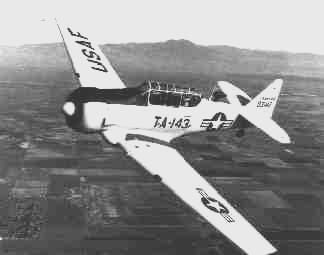 The North American T-6 Texan was a two-seat, single-engine advanced trainer that was used by the US and ROK Air Forces during the Korean War.  A prototype of the T-6, the successor of the O-47, first flew in April 1935.  Many thousands of T-6s were acquired by the US Army Air Force, the US Navy which designated them the SNJ, and by which designated them Harvards.  T-6s were the standard advanced trainers used by most of the Allied powers during World War Two.

The World War Two versions of the T-6 had a 550-hp engine and a maximum speed of 205 mph.  Some versions, especially the gunnery trainers, were armed with a dorsal 0.30-inch machine-gun.  The postwar T-6G had a more powerful 600-hp engine and was somewhat faster.  The LT-6G was developed during the Korean War and was specifically designed for forward air control, being fitted to carry up to twelve underwing target-marking rockets.  The produced more than 17,000 T-6s in all its versions, and allied nations produced several thousand more.

The ROK Air Force possessed ten T-6s at the start of the Korean War, and they quickly went into action dropping hand grenades and locally-produced bombs on advancing North Korean troops.  They served in this role for only a few days as they soon depleted the local stock of bombs, and US aircraft began flying combat missions.  The ROK Air Force acquired an additional fourteen T-6s during the war and used them extensively for training their new pilots.

Korean War T-6s are most famous for their service as forward air controllers, designating targets for and coordinating UN air strikes throughout the war.  Originally, they equipped the 6147th Tactical Control Squadron, which operated with the call-sign “Mosquito.”  The “Mosquito” nickname became associated with both the 6147th TCS and with their T-6 aircraft.  The 6147th TCS, and its successor, the 6147th Tactical Control Group, were originally mostly equipped with older T-6Cs and T-6Fs, but later in the war they used the improved T-6G as well as several LT-6Gs, which had been specially modified for battlefield surveillance and forward air control.

The T-6 Texan and its variants served for decades with many countries, and it is probably the most widely used training aircraft of all time.