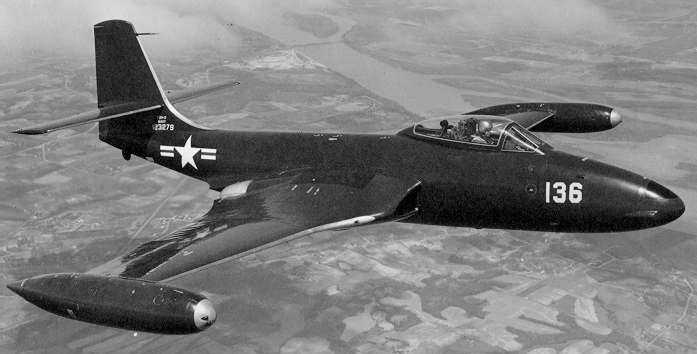 The McDonnell F2H Banshee was a single-seat, twin-engine, carrier-based, all-weather jet fighter used by the US Navy and Marine Corps during the Korean War.  Designed as an improved version of the McDonnell FH-1 Phantom, a prototype of the F2H first flew on 11 January 1947.  It was accepted for service, and initial deliveries to the US Navy began in August 1948.  The F2H was armed with four 20mm cannon, could carry up to 1,000 lbs. of bombs, and had a maximum speed of 580 mph.  About 890 were produced.

The F2H-2 flew its first combat operations of the Korean War on 23 August 1951 flying with VF-172 from the aircraft carrier USS Essex.  The F2H-2 equipped four USN fighter squadrons during the Korean War.  In addition, photo-reconnaissance variants of the F2H, the F2H-2P, were used by both US Navy and Marine Corps aerial reconnaissance squadrons.  The ten F2H-2P jets that formed part of the Marine Corps 1st Reconnaissance Squadron, VMJ-1, provided invaluable service during the last part of the Korean War as the Fifth Air Force did not have enough daylight photographic aircraft to meet its requirements.

The F2H was a very successful aircraft, and it continued to serve with the US Naval Reserve until the mid-1960s.