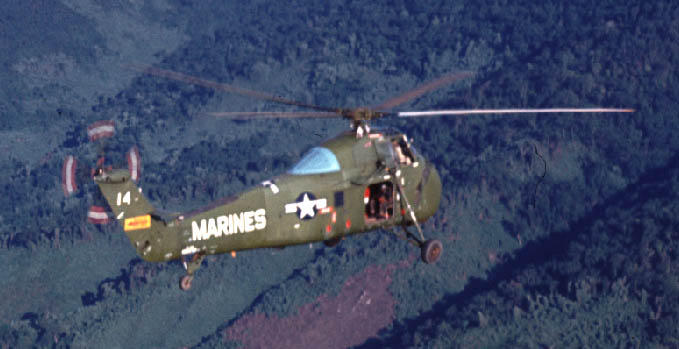 The Sikorsky H-19/HRS-1 was an eight-seat utility helicopter used by the US Air Force, Army, and Marine Corps during the Korean War.  The US Air Force’s YH-19 helicopter first flew on 10 November 1949.  Two experimental YH-19s arrived in Korea on 23 March 1951 and began evacuating casualties the next day.  They proved so successful that they were adopted by the US Air Force with the designations H-19A and H-19B and by the US Navy with the designations HO4S-1 and HO4S-3.  The US Marine Corps acquired troop transport versions that were designated HRS-1 and HRS-2.  The US Army designated its versions as the H-19C and H-19D, both named “Chickasaw”.  Almost 1,000 H-19 helicopters and variants were produced.

The US Marine Corps Helicopter Transport Squadron 161, HMR-161, which arrived in Korea on 30 August 1951 was equipped with 15 HRS-1 helicopters.  During the last year of the Korean War HMR-161 and the 1st Marine Division began expanding the role of helicopters, using them for air assault, for air  transport supporting an attacking force, and for tactical re-deployments.

The US Army’s 6th Transportation Helicopter Company, equipped with 12 H-19Cs, arrived in Korea during March 1953.  They were primarily used for light transport and for casualty evacuation