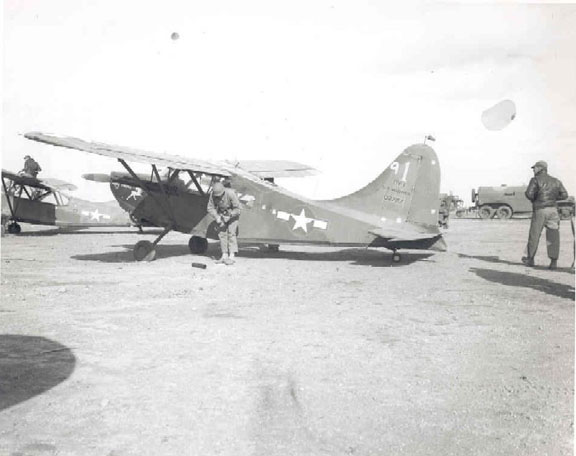 The Stinson L-5/OY was a three-seat, single-engine liaison aircraft used by the and ROK Air Forces, the and ROK Armies, and the US Marine Corps during the Korean War.  The Stinson L-5 Sentinel, based on the civil Stinson Voyager, entered US Army Air Force service in 1942.  It was larger and heavier than the other L-type aircraft used by the during World War Two, and it quickly showed its usefulness, being nicknamed “the Flying Jeep.”  About 3,600 Sentinels were procured for the military, and it served in every theater of the war, being used for liaison, artillery observation, reconnaissance, and as an ambulance.  The US Navy and Marine Corps acquired several hundred Sentinels with the designations OY-1 and OY-2.

Sentinels were widely used during the first years of the Korean War, serving with most US Army divisions, with the US Marine Corps observation squadron 6, VMO-6, and with the US Air Force’s 3rd Air Rescue Squadron.  Sentinels were also used by the ROK Air Force, which possessed four at the start of the war and received ten more from the during the war.  The ROK Army took over responsibility for artillery observation in mid-May 1951, using L-4s and L-5s acquired from the .