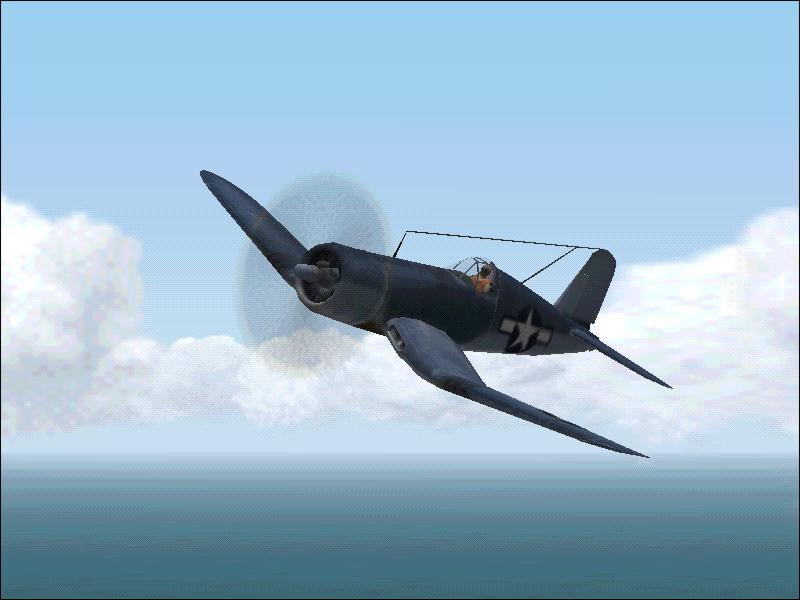 The Vought F4U/AU Corsair was a single-seat, single-engine, carrier-based fighter-bomber used by the US Navy and Marine Corps during the Korean War.  A prototype of the F4U first flew on 29 May 1940, a production aircraft first flew on 25 June 1942, and the first deliveries to the US Navy began on 31 July 1942.  The F4U was first used in action on 13 February 1943 by the US Marine Corps.

The F4U-4B had a 2,000-hp engine giving it a maximum speed of 446 mph.  It was armed with six 0.50-inch machine-guns and could carry up to 3,000 lbs. of ordnance.  The F4U-4C was similar except that it was armed with four 20mm cannon.  A total of 12,571 Corsairs of all models were built before production ended in December 1952.  A special ground attack version of the Corsair was the AU-1, of which 110 were built.  It had a 2,300-hp engine, was more heavily armored, and could carry a heavier ordnance load, but its range was considerably less than that of the F4U.

The Corsair was the most widely used naval aircraft of the Korean War, equipping eighteen USN fighter squadrons, nine USN reserve fighter squadrons, and five USMC fighter/attack squadrons.  Flying from aircraft carriers or forward air bases (the F4U was the only US Marine Corps fighter ever to operate from North Korean airfields), the F4U usually carried a much heavier bomb-load than Air Force aircraft.  It was extensively used for ground attack and interdiction missions.  These were very dangerous, and 328 Corsairs, 312 F4Us and 16 AUs, were lost due to enemy action, almost all of them to ground fire.

The night-fighter variant of the Corsair, the F4U-5N, also saw considerable action, being used by one of the USMC’s night-fighter squadrons, VMF(N)-513, as well as several USN detachments.  Communist night-time raids in the area were so intense in April and May of 1953 that, at the Fifth Air Force’s request, the USS Princeton stationed a detachment of four F4U-5Ns of VC-3 in the area.  USN Lt. Guy Bordelon shot down five night-raiders during June and July of 1953 and became the only US Navy ace of the Korean War as well as the only “Bedcheck Charlie” ace of the war.

Reconnaissance versions of the Corsair, F4U-4Ps, were also used during the war by a USMC photo reconnaissance squadron, VMJ-1.