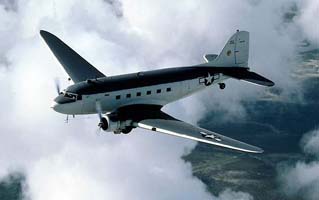 The Douglas C-47 Skytrain was a twin-engine medium transport used by the , ROK, Australian, Greek, and Thai Air Forces, and by the US Marine Corps during the Korean War.

The Douglas DC-3 Sleeper Transport first flew on 17 December 1935.  It quickly became the main aircraft used by US airlines.  The US Army Air Force designated the military version the C-47 Skytrain, but it was more widely known by its unofficial nickname, “Gooney Bird”.  The C-47 was the mainstay of Allied troop carrier and transport operations during World War Two.  It was also used during the Berlin Airlift in 1947-1948.

The C-47 had a crew of 3 and could carry up to 28 troops or 6,000 lbs. of cargo.  The built 10,692 by the end of World War Two, and many were built by other countries.  In US Marine Corps and Navy service the Skytrain was designated the R4D.  In British and Commonwealth service the C-47 was designated the Dakota.  The produced about 2,000 with the designation Lisunov Li-2.

When the Korean War started the US Air Force had 22 operational C-47s in serving with various units.  Most of the C-47s were re-assigned to the 21st Troop Carrier Squadron for operations in .  When Korean airstrips proved unable to bear the weight of C-54s, the C-47s and C-46s were used to fly cargo into and evacuate casualties from those airstrips.  The C-47, being lighter than the C-46, was able to operate on many of the smaller and more primitive airstrips, and that became its primary use.  In mid-1951 the US Air Force and Marines began using some Skytrains for night reconnaissance and for dropping flares to support night intruder missions.

The R4D was used by one US Marine Corps transport squadron, VMR-152, that served in .  C-47 Dakotas also equipped an Australian squadron, a Greek flight, and a Thai detachment.  One C-47 was provided to the ROK Air Force, which used it throughout the war.

The C-47 remained in US Air Force service for more than forty years, and the AC-47D gunship was used during the Vietnam War.  The DC-3/C-47 Skytrain/Dakota/”Gooney Bird” is probably the most famous transport aircraft of all time and still serves with some airlines that operate in primitive conditions.