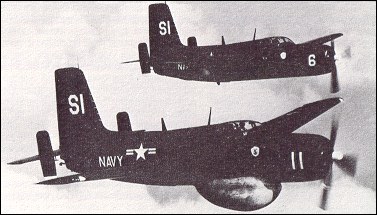 The Grumman AF-2 Guardian was a single-engine, carrier-based, anti-submarine aircraft used by the US Navy during the Korean War.  A prototype of the Guardian first flew on 18 December 1946, but the Guardian went through a lengthy development process with several different prototypes being built.  The first production Guardian flew on 17 November 1949, and Guardians entered service with the US Navy on 18 October 1950.

The Guardian was designed to be used in hunter/killer pairs.  The “hunter”, the AF-2W, had a four-man crew operating a ventral radar.  The “killer’, the AF-2S or AF-3S, had a two-man crew and could carry up to 4,000 lbs. of internal and 1,500 lbs. of external ordnance, typically sonobouys and depth charges.  The Guardian had a 2,400-hp engine and a maximum speed of 317 mph.  About 400 of all versions were built.

Guardians flew combat missions from US Navy aircraft carriers in Korean waters from March 1951 through May 1953.

The Guardian remained in service with the US Navy until 1955 when it was replaced by the S2F.