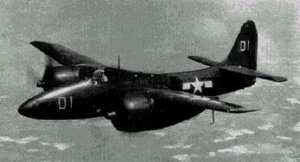 The Grumman F7F Tigercat was a two-seat, twin-engine night-fighter used by the US Marine Corps during the Korean War.  A prototype of the Tigercat first flew on December 1943, and deliveries to the Marine Corps began in April 1944.  It was an excellent aircraft, however, it did not see operational service during World War Two.

F7F-3N night-fighters of VMF(N)-542 arrived in on 11 September 1950 and moved to bases at Kimpo airfield, near , on 19 September 1950.  The Tigercats saw relatively little combat until June 1952 when they began escorting B-29s on their night bombing missions.  The F7F was an ineffective escort versus MiG-15 night-fighters so the Marine’s VMF(N)-513 converted to F3D-2N Skyknight night-fighters in November 1952.