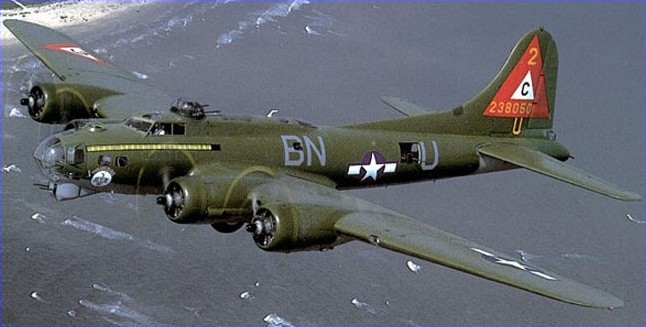 The Boeing SB-17 was a four-engine, long-range search and rescue aircraft with a crew of nine or ten used by the US Air Force during the Korean War.

A prototype of the B-17 first flew on 28 July 1935.  Production began in 1936 and 12,731 were produced.  With its armament of thirteen 0.50-inch machine-guns and able to carry up to 17,600 lbs. of bombs the Flying Fortress served throughout World War Two and was the backbone of the US Air Force’s daylight bombing raids against Germany.

When the war ended all but a few hundred B-17Gs were retired.  Fifty B-17Gs were converted for air-sea rescue.  They were re-designated SB-17 and were equipped with a search radar and a droppable life boat.

When the Korean War started there were 23 operational SB-17s serving with two squadrons of the US Far East Air Forces.  The SB-17s of the 3rd Air Rescue Squadron, based in Japan, provided valuable service during the Korean War by patrolling the Tsushima Strait between Japan and Korea and rescuing many pilots and aircrew.  There were also two reconnaissance RB-17s serving with the 6204th Photo-Mapping Flight which was stationed at Clark Air Force Base in the Philippines.  Most of the aerial photography of Korea during the early months of the war was provided by these RB-17s.