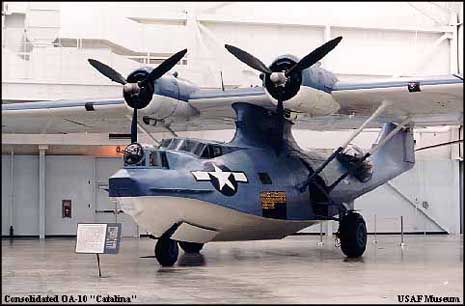 The Consolidated OA-10 Catalina was a twin-engine, patrol flying boat used by the USAF for air-sea rescue during the Korean War.  A prototype of the Catalina first flew on 28 March 1935.  The Catalina, designated PBY-1, entered service with the US Navy during October 1936.  It became the most widely used flying boat of World War Two with 3,290 built in many different models, culminating with the PBY-6A.

The Catalina had a crew of seven to nine, was armed with two 0.50-inch and three 0.30-inch machine-guns, and could carry up to 4,000 lbs. of ordnance.  For air-sea rescue they could be equipped with an airdropped lifeboat under each wing.

The US Army Air Force acquired 56 PBY-5As, which it designated OA-10, and used them for air-sea rescue during both World War Two and the Korean War.  They were so successful that the Air Force later acquired 230 OA-10As, and 75 OA-10Bs.

Several OA-10 Catalina’s were sent to the Korean theater shortly after the start of the war.  They served with the USAF 3rd Air Rescue Squadron and its successor, the 3rd Air Rescue Group, patrolling the and rescuing UN pilots and airmen.