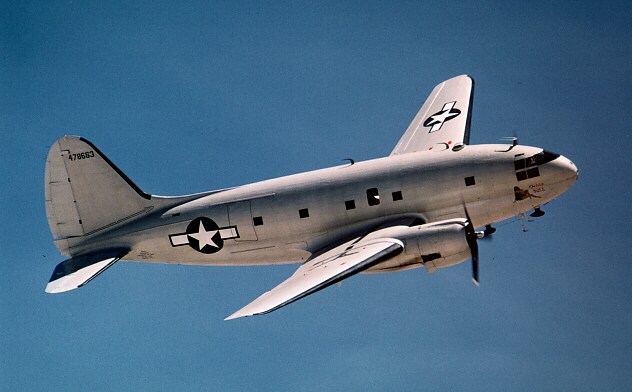 The Curtiss-Wright C-46 Commando was a twin-engine medium transport aircraft used by the USAF during the Korean War.  A prototype of the C-46 first flew on 26 March 1940.  It entered service with the US Army Air Force in July 1942.  It was the largest and heaviest twin-engine aircraft to serve with the USAAF, and it was heavily used, mostly in the Pacific and the Chine-Burma-India theaters.

The Commando had a crew of four and could carry up 50 troops or 10,000 lbs. of cargo.  The C-46 could carry a heavier load than the more famous C-47, especially at high altitudes, and it was the mainstay of the air cargo route over the “Hump” from to during World War Two.  A total of 3,341 were built.

When the Korean War started there were thirteen operational C-46s in and they quickly proved their worth by flying cargos into ’s relatively primitive airstrips.  Additional C-46s were sent to the , and there were two full squadrons, serving with the 1st Troop Carrier Group, operating from Japanese airbases by August 1950.  In November 1950 the 47th Troop Carrier Group, with four squadrons of C-46s, began flying transport operations from .

The Commando provided extraordinary service during the Korean War.  It was versatile, and it was the most reliable transport aircraft in the Far East Air Forces.  Even though slated for replacement by the C-119, it proved to be so useful and reliable for flying cargo and personnel into that it remained in service throughout the Korean War.