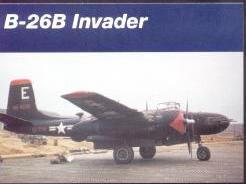 The Douglas B-26 Invader was a three-seat, twin-engine light bomber used by the US Air Force during the Korean War.  Development of the A-26, as it was initially designated, began in 1940.  Three prototypes were ordered and, after extensive testing, the design was finalized and production began.  The first A-26 Invaders were delivered to the USAAF in April 1944, and it began operations in Europe in November 1944.  A-26s also served during the invasion of Okinawa.  After World War Two all aircraft with “A” (attack) designations were changed to “B” (bomber) designations, and the A-26 became the B-26.  Fortunately, the B-26 Marauder had already been retired, or there would have been enormous confusion.

When the Korean War began Far East Air Forces had 26 operational B-26s that equipped the two squadrons of the 3rd Bombardment Group.  They were quickly reinforced, and by November 1950 there were two groups of B-26s, each with three squadrons, operating with the US Fifth Air Force.  B-26s flew 55,000 sorties during the Korean War, including both the first and the last US bombing missions of the war.