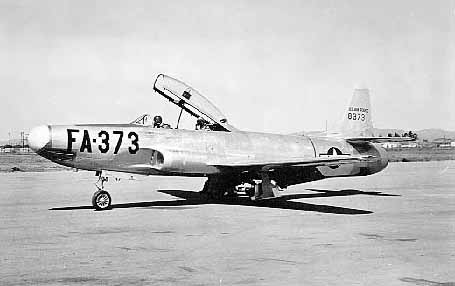 The Lockheed F-84 Starfire was a two-seat, single-engine, all-weather jet fighter that was used by the US Air Force during the Korean War.  The Starfire was based on the T-33 with a more powerful engine and a lengthened fuselage to make room for fire-control radar.  A prototype of the Starfire first flew on 16 April 1949, and it entered service with the US Air Force on 29 December 1949.

Starfires first arrived in Korea in May 1952 where they served as night-fighters with two US Air Force squadrons – the 319th and 68th Fighter-Interceptor Squadrons.  Initially, the Air Force tried to use the Starfire to intercept North Korean night raiders, but the F-94 was too fast and unmaneuverable to cope with the piston-engined Po-2s and Yak-18s the North Koreans used.  In November 1952 The Air Force began using Starfires to protect B-29 night raids from MiG-15s.  They shot down four MiGs, and were so successful at protecting B-29s that no B-29s were lost to enemy action after January 1953.

The F-94 remained in US Air Force service as a night-fighter and all-weather fighter until 1959.