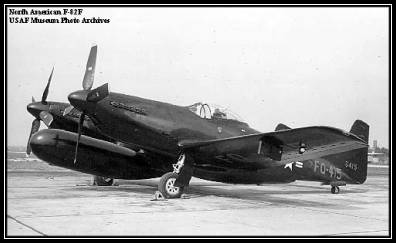 The North American F-82 Twin Mustang was a two-seat, twin-engine, long-range, all-weather fighter used by the US Air Force during the Korean War.  Despite the P-51ís exceptional range the US desired a fighter with even longer range for use in the Pacific theater.  The Twin Mustang was, basically, two Mustangs joined together by special center sections and could be flown from either seat.  The Twin Mustang appeared too late to see combat during World War Two.  Only twenty were built by the end of the war.

The F-82 provided excellent service during the first weeks of the Korean War, but it was withdrawn from combat as there were serious shortages of spare parts, and the few available Twin Mustangs (there were only 168 total in USAF service in June 1950) were more needed in the all-weather and night-fighter role.