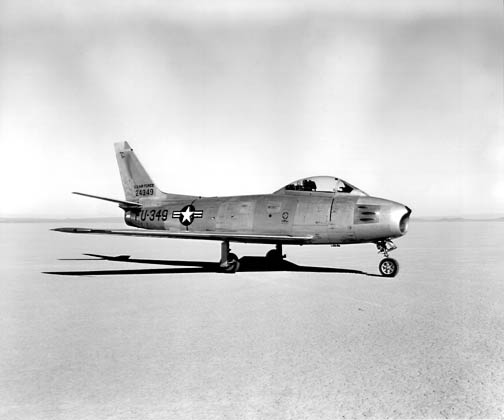 The North American F-86 Sabre was a single-seat, single-engine jet fighter-bomber that served with the and South African Air Forces during the Korean War.  A prototype of the F-86 first flew on 1 October 1947, the first production F-86A flew on 20 May 1948, and the Sabre entered US Air Force service during 1949.  The F-86A had a 5,200-lb thrust engine, giving it a maximum speed of 679 mph.  It was armed with six 0.50-inch machine-guns and could carry either sixteen 5-inch rockets or up to 2,000 lbs of bombs.

On 11 November 1950, a week and a half after first encountering Soviet MiG-15s over Korean, the US 4th Fighter-Interceptor Wing, equipped with 49 F-86As, was ordered to the Far East.  The 4th flew its first mission over northern on 15 December 1950 and first engaged in combat with MiG-15s two days later.  Although only a few dozen F-86s were available, they, along with the F-84, were able to preserve UN air superiority over and prevent any of the northern Korean airfields from becoming operational.  They were not, however, able to protect Bomber Commands B-29s from MiGs, and after heavy B-29 losses during September 1951 B-29 flew only nighttime bombing missions.

A second wing of Sabres, the 51st Fighter-Interceptor Wing which had converted from F-80s to F-86Es, began flying Sabre missions on 1 December 1951.  Because of a worldwide shortage of F-86s the US Air Force purchased 60 F-86Es from the Canadair Aircraft Company in February 1952 to help bring the Fifth Air Force up to strength.  In June 1952 the first F-86Fs began arriving in the , and by August the two Sabre wings were up to their authorized strength of 75 aircraft each.  The F-86F was a much improved model with a 5,910-lb thrust engine giving it a maximum speed of 688 mph.  More importantly, the F-86F had a re-designed leading edge on its wings which greatly improved its performance at higher altitudes, making it better able to combat high-flying MiGs.

When the ceasefire was signed the US Fifth Air Force had two wings of interceptors, the 4th and 51st Fighter-Interceptor Groups, equipped with 165 F-86 interceptors, and two wings of fighter-bombers, the 8th and 18th Fighter-Bomber Groups, equipped with 132 F-86 fighter-bombers.   In addition to its service as a fighter, six F-86As were modified for photo-reconnaissance in October 1951, and they were used throughout the remainder of the war.

According to the US Air Force’s official history only 78 F-86s were lost in aerial combat during the Korean War, and they scored 810 air-to-air victories, including 792 versus MiG-15s.  The F-86 Sabre proved to be a very successful fighter and served with NATO, , and many other air forces during the 1950s.