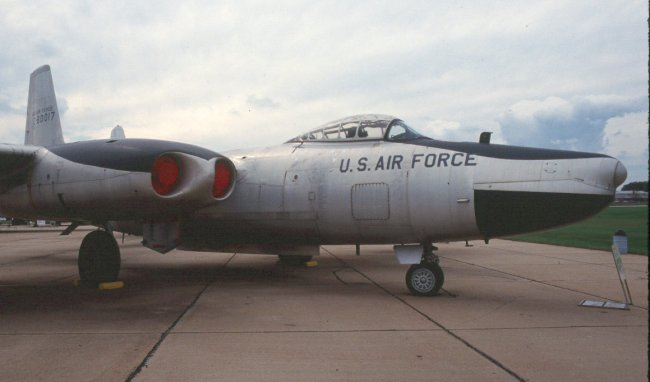 The RB-45C was the reconnaissance variant of the B-45, and 33 of them were built.  It carried twelve cameras in its fuselage, had four engines each with 6,000-lb thrust and could reach a maximum speed of 570 mph.  Its only armament was two 0.50-inch machine-guns in a tail turret.

Detachment A of the 84th Bombardment Squadron arrived in the Korean theater in November 1950 with two RB-45Cs.  They were fast and maneuverable at high altitudes so they were used for day photographic reconnaissance over “MiG Alley” where RB-17s and RB-29s proved to be too vulnerable.  RB-45s could often escape pursuing fighters, but a MiG-15 shot one down on 12 December 1950.  Future flights of RB-45Cs over areas where there was a MiG threat were usually escorted by F-86 Sabres.  RB-45Cs were flown throughout the rest of the Korean War by the 91st Strategic Reconnaissance Squadron.