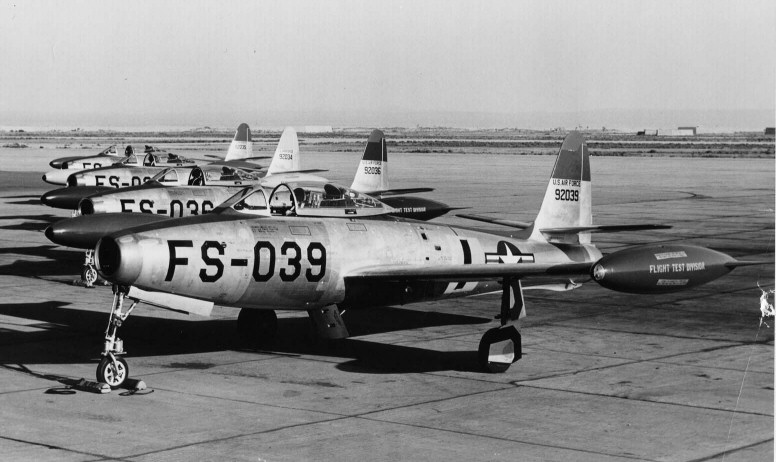 The Republic F-84 Thunderjet was a single-seat, single-engine jet fighter-bomber used by the US Air Force during the Korean War.  A prototype of the Thunderjet, designed as a successor to Republic’s P-47 Thunderbolt, first flew on 28 January 1946.  In September 1946 an F-84 prototype established a new US national speed record of 611 mph, and the Thunderjet entered service in November 1947.  The F-84G had a 5,600-lb thrust engine and a maximum speed of 622 mph.  The F-84D and F-84E both had 5,000-lb thrust engines and were somewhat slower.  All three models were armed with six 0.50-inch machine-guns and could carry up to 4,000 lbs. of ordnance.

The 27th Fighter-Escort Group, an elite SAC escort unit equipped with F-84E Thunderjets, was deployed to Japan during November 1950 to combat the communist MiG threat.  The 27th Group began combat operations on 6 December 1950.  As the number of MiGs operated by the communist forces increased the F-84 proved inadequate to protect B-29s from them.

The F-84 did have the speed and maneuverability to protect itself from MiG attacks so it became the aircraft of choice for many ground attack and interdiction missions within range of MiG airbases.  The biggest advantage of the F-84 is that it had considerably longer range than the F-80.  Its main disadvantage is that it required a considerably longer runway than the F-80.  The Fifth Air Force had been scheduled to receive some F-84s during 1949, but it retained F-80s because at that time there were no airfields in Japan suitable for the F-84.

F-84s took such heavy losses in interdiction missions that by April 1952 the Fifth Air Force’s two operational Thunderjet wings were reduced to a combined total of 80 serviceable aircraft, out of an authorized strength of 150 F-84s.  The F-84 shortage was so bad that the Air Force sent 102 outdated F-84Ds to the Far East to replace losses.  During the next few months the Thunderjet wings were reinforced to full strength, and F-84Gs began replacing the F-84Ds.  At the end of the Korean War there were three F-84 groups, with 218 operational aircraft, serving with the Fifth Air Force – the 49th, 58th, and 474th Fighter-Bomber Groups.

Over 2,000 F-84s were supplied to NATO allies, and the F-84 Thunderstreak, a swept-wing successor of the Thunderjet, continued in US Air Force service until 1971.